Witnessed participation from 5000+ companies/establishments across 30+ sectors 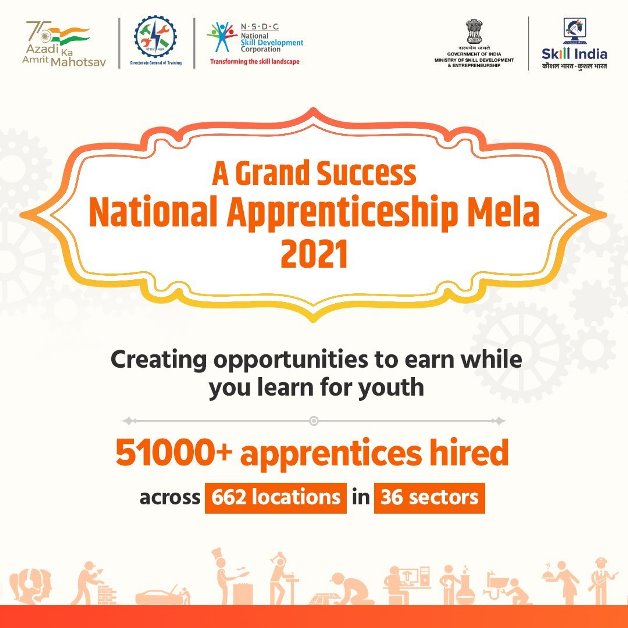 Skill India with due support from Directorate General of Training (DGT) and National Skill Development Corporation (NSDC) today organized a day long ‘Apprenticeship Mela’ across the country in over 660 locations. Under the initiative, nearly 51,991 apprentices were hired and the event witnessed participation from more than 5000+ organisations, operating in more than 30 sectors such as Power, Retail, Telecom, IT/ITeS, Electronics, Automotive and more. Additionally, country’s aspiring youth received the opportunity to engage and select prospects from more than 500 trades (Designated and Optional) including posts for Welder, Electrician, Housekeeper, Beautician, Mechanic and more.

The applicants received several benefits by being a part of the Apprenticeship Mela as they got on-the-spot apprenticeship offers from respective employers along with receiving direct industry exposure. They have been offered monthly stipends as per the Government standards ranging from Rs.5000 to Rs. 9000 per month, this being a huge opportunity for the candidates to earn while they learn.The candidates will further get certification from National Council for Vocational Education and Training (NCVET), increasing their chances of employability after the training.

Shri Rajesh Aggarwal, Secretary, Ministry of Skill Development and Entrepreneurship said that the Ministry received an overwhelming response from the candidates during the Apprenticeship Mela, highlighting our commitment towards providing adequate training in market-relevant skills to India’s youth. He hoped that with nearly 52,000 apprentices getting hired during this event, we will be able to scale-up the skilling standards in the country to achieve the vision of ‘Skilled India’. He congratulated all the hired apprentices who got the opportunity to engage with more than 5,000 establishments during this occasion. Apprenticeship training is the most sustainable model of skill development when it comes to providing demand-driven skills and addressing the technical skill gaps faced by employers. He stressed that by taking forward such initiatives, we will support organisations and the candidates to reap the benefits of apprenticeship training to its full potential, facilitating innovations in earn-while-learn-based learning systems.

Neelam Shammi Rao, Director General (Training), DGT said that with the changing market dynamics and the industry evolving in this new order, apprenticeship is becoming an important component for preparing our youth for the future of jobs. She congratulated all the apprentices who have received opportunities during the apprenticeship mela and wish them luck for their future endeavors.

The event also stood as a great opportunity for the participating establishments who got the chance to meet the potential apprentices at a common platform and could select the candidates as per their requirements. The event witnessed participation from key establishments such as Railways, ONGC, Tata, Maruti Udyog and many more. Additionally, small-scale industries with minimum four working members also hired apprentices at the event.

The National Policy of Skill Development and Entrepreneurship, 2015 launched by the Hon’ble Prime Minister on July 15th, 2015 recognises apprenticeship as a means to provide gainful employment to skilled workforce with adequate compensation. MSDE has also taken several efforts to increase the number of apprentices hired by enterprises in the country. The aim is to fill the gap in supply and demand for skilled workforce and meet the aspirations of the Indian youth through gaining on-the-job training and securing better opportunities for employment.

MSDE has brought significant reforms to the apprenticeship rules to drive greater participation in the Apprenticeship training in the country. These reforms include: